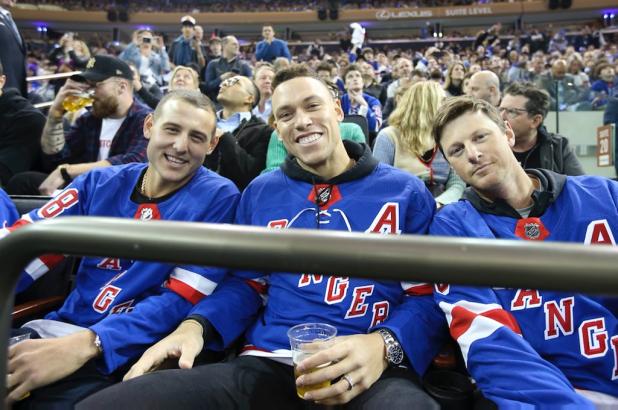 Yankees outfielder Aaron Judge doesn’t only catch baseballs. He was spotted at a recent Rangers playoff game catching a puck that flew over the glass, spies told Page Six. And he didn’t even need a mitt.

Judge was in the stands at Madison Square Garden with his wife, Samantha Bracksieck, when the puck went flying.

“During the first period, a puck was rifled right over the glass, right at Aaron, and he barehanded it,” a spy told Page Six.

“It was like a slapshot. It would’ve taken someone out if it hit them in the head, but he caught it.”

We also hear that Judge wasn’t done thrilling fans in the stands. He also caught a Rangers T-shirt which he then tossed into the crowd.

During the game on Thursday, Judge also sat with fellow Yankees stars Anthony Rizzo and DJ LeMahieu to see the Rangers beat the Penguins. The Bronx Bombers even had their own beer chugging competition with the crowd cheering them on.

Rizzo easily won the chug, reported The Post, while Judge and LeMahieu went down to the wire – but LeMahieu beat him to finish second. The three brought the crowd to its feet.

Unfortunately the Rangers then headed to Pittsburgh to lose their next game against the Penguins without the Yankees as lucky charms.

Either way, the baseball stars had a lot to celebrate at the hockey game since their team has the best record in baseball this season, and Judge has hit nine homers. They played the Texas Rangers on Sunday.