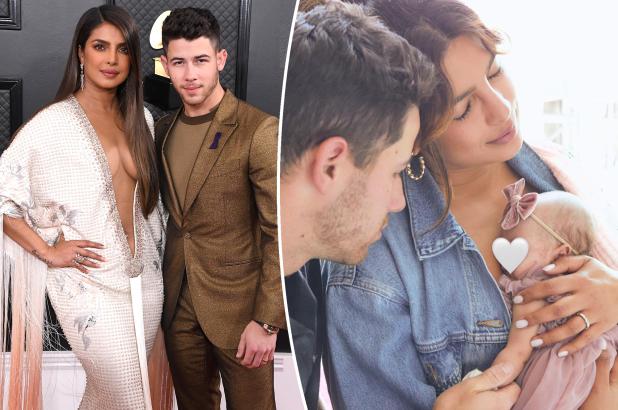 “Life is beautiful,” the Jonas Brothers member, 29, gushed during a “Today” show appearance when asked about becoming a new dad.

Jonas and the “Quantico” alum, 39, revealed in January that their daughter had arrived via surrogate.

The couple shared a photo of their baby girl earlier this month, revealing that Malti spent “100 plus days in the NICU” and was finally home.

“Every family’s journey is unique and requires a certain level of faith, and while ours was a challenging few months, what becomes abundantly clear, in retrospect, is how precious and perfect every moment is,” the actress captioned the May 8 Instagram photo with her husband and little one, calling their journey to parenthood a “rollercoaster.”

In the sweet shot, Chopra held the newborn, whose face was covered with a white heart emoji.

“There is no one I’d rather do this with than you,” she wrotequte. “Thank you for making me a mama @nickjonas I love you.”

In a post of his own, Jonas praised his wife in honor of her first Mother’s Day.

“Babe, you inspire me and every way, and you are taking to this new role with such ease and steadiness,” the “Dancing With Myself” star wrote via Instagram. “I am so grateful to be on this journey with you. You are already an incredible mother.”

The former Disney Channel star also called his daughter a “badass” in the social media upload.

“Let’s get it M!” the actor wrote at the time. “Mommy and Daddy love you.”

Before welcoming Malti, the pair were the proud aunt and uncle of Joe Jonas’ 1-year-old daughter, Willa, as well as Kevin Jonas’ two girls — Alena, 8, and Valentina, 5. (Joe, 32, is currently expecting baby No. 2 with wife Sophie Turner.)

Prior to Malti’s arrival, he and Chopra were vocal about their plans to start a family.

“I definitely want to have kids,” the former pageant queen told People, six months ahead of their December 2018 wedding in India.

She added, “It’s going to happen in the next 10 years. Well, hopefully earlier than that. I’m very fond of children and I want to be able to do that.”