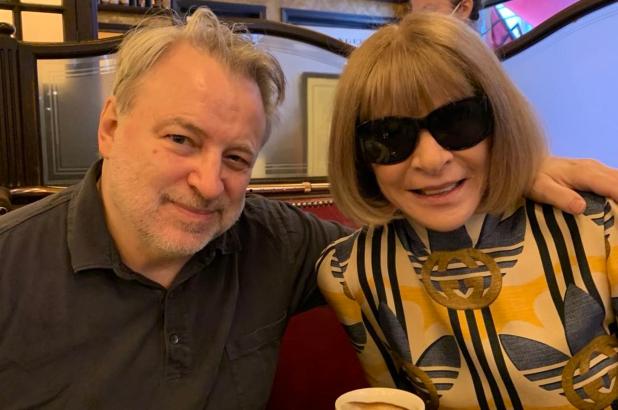 Keith McNally responded to a fan who accused him of being a “star-f–k” for posting a photo with Anna Wintour.
keithmcnallynyc/Instagram

Keith McNally popped off on a fan who accused the restaurateur of being a “star-f–k” for cozying up to pal Anna Wintour.

McNally, 70, posted a photo to Instagram of himself and Wintour, 72, having breakfast Thursday at his famed Soho restaurant, Balthazar.

In an effort to be tongue-in-cheek, he wrote, “As usual, the bastard wanted something. For the umpteenth time, Anna begged me to be on the cover of Vogue magazine. I told her again and again: No F–king Way!”

They commented that McNally is “much more admirable when you don’t starf–k” before dismissing his Wintour schmoozing as “part of the biz [you’re] in.”

The commenter described themselves as a “huge fan” of McNally nonetheless.

Perhaps that’s why McNally took it easy on them when he fired back with a simple: “Please don’t assume. Anna’s been a good friend since 1976.”

The comment was eventually removed, but McNally echoes to Page Six that the Vogue editor has “been a really good friend of mine for 46 years.”

He even partially credits her for him getting into hospitality. And now, “when we meet, we actually never talk about restaurants or fashion,” he says, adding, “We always talk about tennis and theater. We both love both.”

McNally also tells us that “Anna’s much funnier than people realize.”

Wintour was spotted at the premiere of Jennifer Lopez’s new “Halftime” Netflix documentary the night before her meetup with McNally. Our spies also recently spotted her having dinner at Indochine with Huma Abedin and Jeff Bezo’s girlfriend, Lauren Sanchez.