In a move reminiscent of Terra’s UST collapse last month, TRON’s USDD lost its peg to the dollar on Jun. 13. One week later, it’s still trading below its price target—and that’s after a $2 billion cash injection from the TRON DAO Reserve.

The TRON stablecoin USDD is meant to track the price of the dollar, but it’s struggled to maintain its peg over the past week.

TRON’s stablecoin is proving that it’s not all that stable after all.

USDD traded as low as $0.93 Sunday, extending a slide that’s taken the algorithmic coin further from its intended $1 price. Though it’s since recovered to $0.96, it’s been trading away from its peg for the last week. The TRON DAO Reserve responded to the initial depeg by deploying $2 billion to help restore its price on Jun. 13, but that plan failed after USDD continued to plummet. The reserve then announced a plan to withdraw 3 billion TRX tokens from a host of unnamed crypto exchanges and DeFi applications “to safeguard the overall blockchain industry and crypto market” on Jun. 16 and today purchased 10 million USDD with the same mission statement, but neither move has successfully restored the peg.

The events recall crypto’s headline story of just one month ago when Terra’s UST, another algorithmic stablecoin that was kept in balance by a separate volatile token, collapsed in the space of a few days, erasing about $40 billion of value from the ecosystem and sending shockwaves through the entire industry. The Terra crash was described as a dark moment for the space and those responsible for promoting the project, namely Terraform Labs and its outspoken CEO Do Kwon, are facing multiple lawsuits in the fallout.

USDD functions much the same way as UST did and launched during peak Terra mania. To achieve its dollar price, it relies on an arbitrage mechanism akin to the one that UST and LUNA used until the meltdown. Arbitrageurs can burn TRON’s $1 worth of TRX token to mint USDD or burn 1 USD for $1 worth of TRX, which is supposed to ensure USDD always trades for around a dollar. USDD made bold promises of “financial freedom” and “zero-risk” yields in a bid to entice users when it launched, and TRON quickly saw the benefit as it became the third biggest DeFi network in total value locked terms. Though it experienced mild volatility over its first month, it faced its first real stress test last week.

The TRON DAO Reserve currently holds $2.3 billion in collateral across TRX, BTC, USDT, and USDC for 723.3 million USDD, meaning the over-collateralization ratio is around 325%. Still, many other algorithmic stablecoins have failed before USDD, and a seven-day depeg event indicates that the product is not working as it is supposed to.

Disclosure: At the time of writing, the author of this piece owned USDT, ETH, and several other cryptocurrencies. 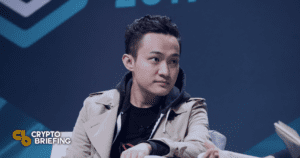 TRON’s USDD Stablecoin Still Below $1 Despite $2B Cash Injection

TRON’s USDD algorithmic stablecoin has been trading under its dollar peg for more than 24 hours.  USDD Drops Below Peg Just 40 days after launching, USDD is fighting for its… 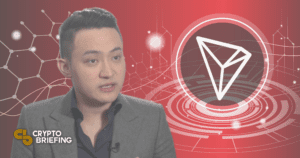