Tennis star Nick Kyrgios has made it into the semi-final of Wimbledon for the first time in his career, despite being charged with assault over an alleged incident involving his ex. Guardian Australia reports the match started badly for Kyrgios as he faced off with Chilean Christian Garín — several times the Australian became irate with the crowd and his team — but he “got lucky” on a couple of breakpoints to progress. He’ll face Rafael Nadal in the semi-showdown, ABC reports, in a “renewed rivalry” between the pair — Nadal has beat Kyrgios the last three times, but Kyrgios shocked Nadal on this very turf in 2014.

“Obviously I have a lot of thoughts and a lot of things I want to say,” Kyrgios told reporters afterwards, when quizzed about the Canberra court summons, and “I understand you want me to give you the answers but I can’t speak any more on the issue”. When asked how the “last 24 hours” affected his mindset, The Australian ($) reports, a typically short Kyrgios said not at all, but revised his answer to admit he’s “only human” and “it was hard to kind of just focus on, kind of, the mission at hand”. But, he said, his preparation paid off. He’ll go to court on August 2.

Get ready for a fourth COVID jab if you’re 30 and older, the Australian Technical Advisory Group on Immunisation (ATAGI) reportedly says, though it’s particularly important if you’re over 50. The Courier-Mail ($) reports the ATAGI made the call yesterday, and that Health Minister Mark Butler will confirm it today. At the moment only those over 65 (or with special health conditions) can get the fourth dose. But our hospitals are under huge pressure, and the flu is well and truly back. Medical expert Paul Griffin told The Australian ($) in the weeks after our fourth dose our protection against COVID is between 80-90%. Meanwhile health officers and leaders in Tasmania, NSW, and Queensland all urged people to wear masks indoors, particularly if you’re immunocompromised, as The New Daily reports. More than 43,500 COVID cases were reported in Australia yesterday.

Also this morning, a new report has found 30% of all COVID deaths have happened in residential aged care, Guardian Australia reports. It also found there were 3105 more deaths than usual in January and February — compare that to 2020, when there were 205 fewer deaths than normal, and 2021, when there were 94 more deaths than normal. For people born overseas, the death rate was 2.5 times higher than Australian-born people, with north African and Middle Eastern people suffering the most. Locally, the rate of death or ICU admission for First Nations Australians was seven times higher than the overall population’s.

Get Crikey FREE to your inbox every weekday morning with the Crikey Worm.

Overseas now and as of 5:58am AEST, at least 38 (!!!) UK ministers and aides have sensationally quit Boris Johnson’s government in protest of the PM’s dodgy handling of an alleged sex pest MP, as BBC reports. Home Secretary Priti Patel has told the PM to resign, as has Transport Secretary Grant Shapps — a longtime ally of Johnson’s. Even Nadhim Zahawi, who was appointed as the UK’s finance minister just yesterday — by Johnson, no less — has told the PM he’s got to go. But Johnson is refusing. He has been meeting with MPs one by one and stressing that “millions” of UK citizens voted for him.

So what happens now? Two options, the British broadcaster continues: either Johnson gives in, resigns, and there’s a leadership contest, or he digs his heels in. If so, it’ll be up to something called the “1922 executive committee” (a pretty powerful organisation representing the Conservative backbenchers) to decide whether to change the vote of confidence rules, as Sky News delves into. See, Johnson already survived a confidence motion recently, as The Guardian reports, and the Tory rules state there can’t be another for 12 months.

It’s good Tory-treachery entertainment for sure, but it does come with a real cost — bill committees scheduled for tomorrow have been cancelled, meaning key legislation is “effectively suspended”, one Labour MP said.

ON A LIGHTER NOTE

When it comes to popping the question, some people relish the planning, execution, and recording of a grand (read: public) romantic gesture. And it’s gone far beyond the classics, like paying a violinist as you kneel in front of the Eiffel Tower. Recently I watched a video of a man bringing his girlfriend a cake as a long table of pals sing her “happy birthday”. He trips — the cake goes splat! on the ground, causing a deafening silence — and she shoots him what is commonly known as a “death stare”. While he’s kneeling down there, he deftly pulls out a ring with a grin. The table realises what’s happening and goes wild, while the girl covers her mouth with happiness. But it doesn’t always go off without a hitch (mind the pun).

In Taiwan, a 24-year-old named Yang decides to propose to her girlfriend, Huang. But Yang is one for the grand romantic gesture. She hires two teenagers to stage a kidnapping of her girlfriend — they’d bring Huang down to the marriage registration office, where Yang would pop out, revealing the ruse, and ask for Huang’s hand. So, early one morning, the guys burst into Huang’s flat, pop her into a big suitcase, and carefully place her in the boot of the car, with a thrilled Yang sitting in the front. When they pull up, however, the office is still closed. Huang feels the car come to a stop, bursts from the boot and screams “Help! I was kidnapped!”. A nearby cop arrests them, but when investigators look through the trio’s text messages, they realise: this is a romantic gesture that has gone very, very wrong. They drop the kidnapping charges.

Hoping your morning holds no sneaky surprises for you.

The rolling average is 15 people a day are dying, and I would encourage the bureaucratic process to steamroll through.

With so much else going on — rising interest rates, the NSW floods, the war in Ukraine — it’s startling to be reminded just how high the death toll from the pandemic is at the moment. It’s with this in mind that the NSW health minister urged that the rollout of the fourth vaccine dose be accelerated. 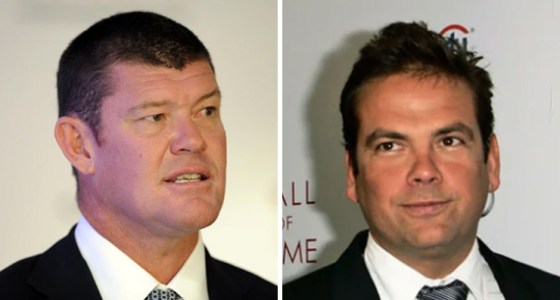 “Lachlan and James are longtime buddies who experienced embarrassing losses at One.Tel and Ten Network Holdings together and jointly controlled Foxtel for 15 years. They even briefly countenanced a $3.3 billion joint privatisation deal of Consolidated Media Holdings in 2008 before the GFC crisis scuttled it …

“As long as Lachlan Murdoch is co-chair of News Corp, don’t expect to read a searing editorial in any News Corp newspaper blasting ASIC for failing to take action against Packer for his failings at Crown. Instead, from ASIC’s point of view, Packer is all clear to join the News Corp and Fox Corp board, although gambling regulators may have something to say about that given the Murdoch empire’s increasingly aggressive moves into the gambling industry.” 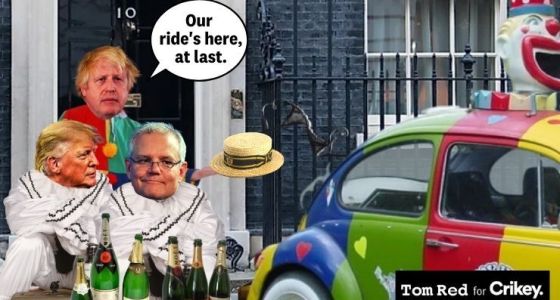 Death comes for the Entertainer in Downing Street

“And then there’s Boris Johnson, who has never been anything more than an entertainer. A serial fabulist in life, his ‘journalism’ was a litany of invented stories, his ‘literature’ a glib facsimile of popular history and biography, and his carefully honed television brand that of a self-deprecating, bumbling, classically educated clown — a stupid person’s idea of a smart person — that he rode all the way to No. 10.

“Johnson has always been about entertainment, not leadership — thus his until recently successful insistence that he never be subjected to the same standards around truth and competence that other politicians are. He’s just pretending to be PM — you’re not taking him seriously, surely?” 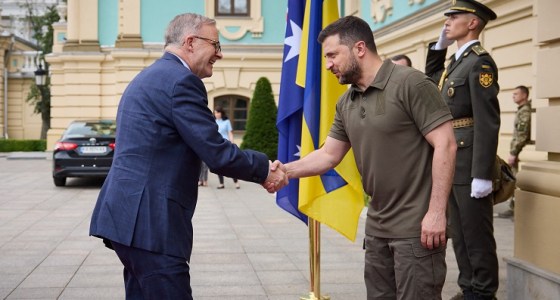 “So, News Corp and political opponents are being disingenuous with regards to a Labor prime minister — colour us shocked. But the other thing this mini-saga demonstrates is why these confected outrages actually matter — News Corp is such a big player in the Australian media landscape it naturally influences the discussion across the nation.

“And so Albanese’s response becomes a story in its own right in the AFR and The West Australian, and the matter is a major topic on ABC RN’s Breakfast show — the circular logic that ‘people are discussing’ this reinforces yet more coverage. Incidentally, opposition leader Peter Dutton is currently on leave.”

READ ALL ABOUT IT

‘I don’t want to help him’: Joe Rogan says he refused Trump as a podcast guest (The New York Times)

Albo just might be the Labor PM for our times — Peta Credlin (The Australian) ($): “To date, his success on the international stage owes as much to the Coalition’s foreign policy framework that he’s inherited, as much as it does his willingness, for now, to operate within it. Twice in our history, Labor prime ministers have broken with their own pasts and their colleagues’ initial expectations to lead the country to a better future: Hawke, obviously; but also John Curtin, the briefly imprisoned Great War conscientious objector, who ‘looked to America’, introduced conscription, and steered Australia to victory in World War II. Is this how Albanese will develop?

“Or will he be a trans-Tasman version of Jacinda Ardern, the former president of the International Union of Socialist Youth, who’s trying to turn New Zealand into Aotearoa, now that she’s able to govern in her own right; or an antipodean version of Joe Biden, the supposed centrist who’s become America’s most left-wing president?  Or, God-forbid, a national version of Daniel Andrews who after a narrow first-term win (like Albanese), went softly softly on his hard-left agenda until he increased his majority at his second election, and then all bets were off, as his redesign of Victorian society began. We can but hope that he’s more Hawke and Curtin than Ardern, Biden or Andrews.”

How we can build a new base for Indigenous wealth — Ben Wyatt (The AFR): “In this time of change and opportunity, a key question facing all First Nations Australians is whether we have the right skills and assets to support our aspirations for the future. One of the most pressing questions is how do we achieve economic sovereignty? First Nations Australians still face the challenges of the past — colonial dispossession and decades of failed policy interventions that have hindered and not helped, regardless of how well-intentioned they may have been. But now, like all Australians, we also face a rising tide of global movements that are reshaping our planet and lives on it.

“Change in Australia — social, industrial and commercial — is accelerating at a pace unlike any in history. The challenge will be to ensure that Aboriginal people are not further distanced and marginalised by this change, but are able to identify and lead this changes. These are what some have called megatrends. Aboriginal Australia can no longer simply benefit on the margins of our success as a nation — we need to have the capacity, the speed and discipline to identify these opportunities and act accordingly. What is clear is that those in the lowest income strata — and globally, almost all First Nations people occupy this space — will find themselves the most challenged by these changes unless they are able to harness the opportunities presented. Inevitably, our political, social, economic, climate and technological environments will be shaped by five megatrends.”