BitMEX co-founder Arthur Hayes said that the euro’s slide was a sign that Bitcoin could hit $1 million by the end of the decade.

The euro is starting to look almost as shaky as some of the world’s leading cryptocurrencies.

The eurozone’s official currency hit a low of $1.0001 today, bringing it within an inch of parity with the U.S. dollar for the first time since 2002. It’s since posted a slight recovery, trading just over half a cent above the dollar at press time. Fears of a Russian gas cutoff and looming recession have prompted a 20% slide in the euro’s purchasing power over the past few months, with the eastern European country’s war on Ukraine accelerating the decline. Meanwhile, the U.S. dollar has strengthened thanks to the Federal Reserve’s commitment to hike interest rates as it attempts to battle soaring inflation rates. The European Central Bank has been slower to act; it’s due to choose between an initial 25 or 50 basis point hike later this month.

Since Russia invaded Ukraine, economists worldwide have warned that a global recession could be likely. President Putin’s repeated threats to cut off European gas supplies have escalated the fears as energy prices could continue to rise if Europe loses its primary gas source.

The declining value of fiat currencies like the euro has long been a point of discussion in crypto circles. Bitcoin was famously born out of the 2008 Global Financial Crisis; its pseudonymous creator Satoshi Nakamoto said that it was a response to central bank incompetency. As Bitcoin has a fixed supply of 21 million coins, crypto enthusiasts often describe it as a “hard money” alternative to traditional currencies. Many of crypto’s most ardent followers believe that fiat currencies are destined to fail on a long-term time horizon because they are designed to inflate. BitMEX co-founder Arthur Hayes memorably commented on the issue in an April blog post, saying that Bitcoin would hit a price of $1 million by 2030. He reaffirmed his bold prediction as the euro crashed Tuesday, arguing that the downturn was the first sign of a so-called “Doom Loop” in which central banks turn to yield curve control as fiat currencies start to collapse. “But please be patient, these things take time,” he added.

Despite the sharp decline in the value of the euro, Bitcoin and the rest of the crypto market hasn’t performed any better in recent months. The top crypto broke below $20,000 yet again today, bringing the global crypto market cap to just over $922.5 billion. It’s around 70% down from its November 2021 peak.

Circle Is Launching a Euro-Backed Stablecoin

The U.S.-based stablecoin provider Circle is launching a fully-reserved stablecoin pegged to the euro. Circle Announces Euro Coin Another euro-backed stablecoin is set to hit the market. 1/ Get ready… 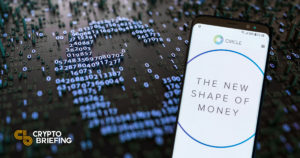 The U.S. central bank announced today it will be raising interest rates by another 0.75% in an effort to combat raging inflation. The Largest Hike Since 1994 The Federal Reserve…

News of record-high inflation rates in the U.S. hit the streets today. According to April data from the U.S. Bureau of Labor Statistics, the year-on-year consumer price index sits at… 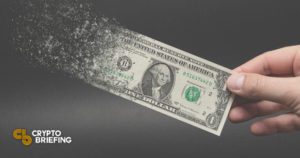